Cave of the Yellow Dog

Cave of the Yellow Dog

New film by Mongolian director Byambasuren Davaa titled "Cave of the Yellow Dog" tells the story of a young Mongolian girl's adoption of a wild dog. This film is a combination of documentary style and scripted feature film making with an intense appreciation of the Mongolian pastoral nomad way of life. The threat of predatory wolves, at-risk sheep and a Mongolian child's emotional attachment to her favourite animal combine to create a strong tale of life on the edge in the Mongolian countryside.
Posted by Mongolian Culture at 10:17 PM No comments:

Labels: Cave of the Yellow Dog

Mongolia - Young Scientist of the Year

The diploma presented to the Young Scientist of Year excerpts from traditional proverb:
“A knowledgeable person shines by his creation
A precious stone shines by its color.”

In addition the diploma notes “You U.Erdenebat discovered the historical artifacts of ancient time and medieval period by archeological studies during the year of the 800th anniversary of the establishment of Great Mongolian State and wrote series of scientific works based on the artifacts.

May your future scientific work and creation be highly beneficial for the state and people and be well known for the world.

The Young Scientist of Year award named after the President of Mongolia consists of title, personal diploma and cash award of one million tugrugs and is sponsored by Anod Bank and Mongolia’s Foundation for Science and Technology.
Posted by Mongolian Culture at 12:34 AM No comments: 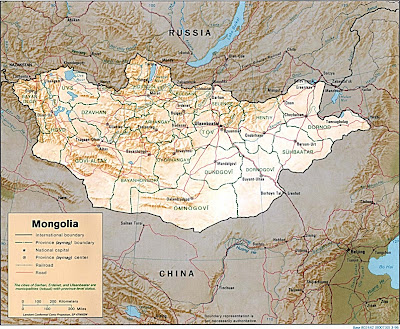 Map of Mongolia by the University of Texas

Location: Northern Asia, situated between the People’s Republic of China and the Russian Federation.

Mongolia has 21 Aimags (provinces) which are divided into 343 Sums (districts) and smaller areas known as Baags.

Average Elevation: More than 5,180 feet (1,580 meters) Average altitude in Mongolia is one mile above sea level.

Major Rivers & Lakes: The Orkhon River is the longest river in Mongolia at 698 miles (1124 km). Lake Hovsgol Nuur is Mongolia’s largest lake and holds 2% of the world’s freshwater supply.

The Gobi Desert is the world’s northernmost desert and has a mostly gravel surface with low-lying rocky hills. One of the earth’s great deserts it ranges through most of southern Mongolia and comprises 17% of Mongolia’s total landmass. Annually desertification in the Gobi Desert is increasing due to overgrazing primarily.

“There came into the world a blue-gray wolf
Whose destiny was Heaven’s will.
His wife was a fallow deer.
They traveled across the inland sea
And when they camped near the source of the Onan River
In sight of Mount Burkhan Khaldun
Their first son was born, named Batachikhan.” 1

Mongolia is an independent nation that rose during the reign of Chinggis Khan (Genghis Khan) who founded the Mongol nation in 1206. Chinggis Khan was born into Mongol tribal nobility in approximately 1162; his given name was Temujin. When Temujin was nine years old his father Yesugei Khan, was poisoned by tribal enemies. Temujin went on to survive abandonment by his clansmen, near starvation, capture by enemies, war wounds and the kidnapping of his wife Borte. Temujin was able to rescue Borte and later attracted a band of followers from many different tribes who saw in him signs of a visionary leader destined for greatness.

Temujin fought and overcame the Dorbets, Tartars, Seljuits, Tonkaits, Merkits, Keraits, Naimans, and other Turkic and Mongol tribes in Mongolia as his power grew. After these successful campaigns he was formally recognized as the supreme leader of the tribes of Mongolia in 1206, and given the title of Chinggis Khan, which means ‘Universal Ruler’.

He then proceeded to conquer the Central Asian kingdom of the Khwaramshah, defeat all the tribes of northern China by 1225 and laid the foundations for the birth of the massive Mongol Empire. Before Chinggis Khan died in 1227 he chose his son Ogodei as successor and advised his sons to expand the empire, recognize Ogodei in writing and to serve each other for the sake of unified strength.2

Today Chinggis Khan is recognized by many as a military and political genius3 without parallel whose empire endured for generations while in comparison Alexander the Great’s empire crumbled as he died.4

The Mongol Empire at its greatest extent spanned most of Asia with its dominions reaching from Korea to Hungary and down to the Indus. The Mongol Empire Khans and their generals defeated the armies that controlled the territories of the nations we know of today as China, North and South Korea, Myanmar, Iran, Iraq, Syria, Turkmenistan, Kazakhstan, Uzbekistan, Kyrgystan, Tajikistan, Georgia, Azerbaijan, Armenia, Afghanistan, northern India, Hungary, Transylvania, Bulgaria, eastern Germany, Russia, Ukraine, Poland and others.

The lands that make up modern day Russia, Ukraine and Kazakhstan were conquered and ruled by the Mongol Empire’s Golden Horde Dynasty from 1237 until 1382. The Golden Horde’s rule endured in Kazan and Astrakhan till 1554 and lasted in Crimea until 1783. Some historians5 have reasoned that the Mongol Golden Horde Dynasty helped the Russian princely states and Muscovy’s development as a regional power, which ultimately led to the creation of czarist Russia and its consolidation of Central Asia.

After conquering China’s Northern and Southern Sung kingdoms, Mongolian Emperors unified and ruled China during the Yuan Dynasty from 1271 till 1368. A Han Chinese peasant leader named Zhu Yuanzhang forced the Mongol Yuan to leave China and became the first Ming Dynasty king in 1368. Warfare between the western Oirod Mongols and the eastern Khalkh Mongols from 1400 to 1454 led to an extended tumultuous division between the Mongols. Esen Khan the Oirod Mongol chief reunited the Mongol tribes and captured the Chinese Ming Emperor Yingzong in 1449. In 1552 the Mongol prince Altan Khan defeated the Oirod and reunited Mongolia. Mongolians largely adopted Tibetan Buddhism during Altan Khan’s reign, 1543-1583.

The Ming Dynasty was gradually weakened by its long wars with the Mongols, internal conflicts, powerful court eunuchs, corruption and other regional campaigns. In 1644 the reign of the last Ming king Ch’ung-Chen (1628-1644) was doomed by yet another large scale peasant uprising rebellion. At that very moment a nomadic tribe called the Jurchen or Manchu swept into northern China, seized the imperial throne and claimed the ‘mandate of heaven’ as their divine right to rule China.

With Russian assistance Mongolia was able to expel Chinese troops trying to reassert Chinese rule in Mongolia in 1921. From 1924 till 1990 Mongolia was known as the Mongolian Peoples Republic and was governed by a single Communist party system under the influence of the U.S.S.R. During the Soviet-style Communist period Mongolia was largely inaccessible to visitors from the West. Until the 1990’s Buddhist monasteries were mostly closed, industrial development was limited, private land ownership was not allowed and there was no official recognition of Chinggis Khan. In 1990 Mongolia had a peaceful transition to a democratic multiparty system of government with democratic elections successfully held in July of 1990.

This Mongolia country information and historical summary page was compiled by the Indo-Mongolian Society of New York in 2007.
Posted by Mongolian Culture at 12:28 AM 1 comment:

Asashoryu of Mongolia, who finished the last tournament in November with a perfect 15-0 record, exchanged thrusts with Roho before grabbing his belt with his right arm and heaved him down.
Posted by Mongolian Culture at 1:29 PM No comments:

Genghis Khan and His Heirs Exhibition 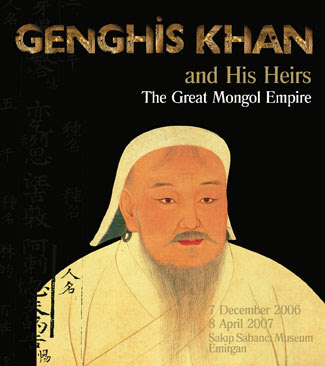 Genghis Khan and His Heirs Exhibition
Sabancı University's Sakıp Sabancı Museum will be hosting the "Genghis Khan and his Heirs - The Great Mongolian Empire" exhibition between December 7, 2006 and April 8, 2007.

The exhibition, jointly organized by the Kunst und Ausstellungshalle der Bundesrepublik Deutschland-Bonn, the Staatliches Museum für Völkerkunde-Munich, the Kunsthistorisches Museum-Vienna, the federal state of lower Austria, the BMBWK and Sabancı University's Sakıp Sabancı Museum and sponsored by Garanti Bank, will bring together 600 pieces, some of which will be seen by the public for the first time, from major museums in Europe, Mongolia and Turkey. In conjunction with the exhibition there will be a programme of lectures, gallery talks, and workshops for children and adults.
Posted by Mongolian Culture at 10:53 PM No comments: