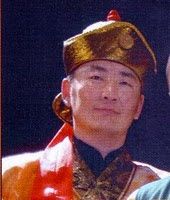 Rest in peace, my friend.
Posted by Mongolian Culture at 7:05 PM No comments: