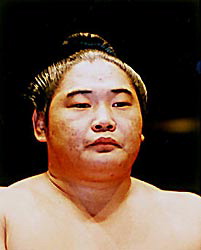 Mongolian wrestler Kyokushuzan retired Tuesday from professional sumo because of heart disease.
The 33-year-old wrestler has been suffering from heart disease for about a year and decided to retire after losing the first match of a tournament that kicked off Sunday, Kyokushuzan said in a televised news conference.
"For all of Japanese fans, thank you for supporting me over the past 15 years," Kyokushuzan said in Fukuoka, southwestern Japan, where the 15-day Kyushu Grand Sumo Tournament is being held.
"First of all, I really want to express my gratitude to my stable master Oshima for coming as far as Mongolia 15 years ago and taking me to Japan, and bringing me up like this," said Kyokushuzan, whose real name is Daver Batobayal.
"After my bout yesterday, my heart felt constricted and I realized that I can't go on wrestling," said Kyukushuzan. "This was an important decision because I want to live a long life after sumo."
In his sumo career, Kyokushuzan won special prizes for outstanding performance, fighting spirit and technique five times.
Kyokushuzan, currently the 10th-ranked maegashira, made his sumo debut along with compatriot Kyokutenho at the spring meet in 1992, and was promoted to the elite makuuchi division in 1996.
He was promoted to komusubi, the third-highest rank below grand champion, at the 1997 spring tourney.
The current yokozuna, or grand champion, Asashoryu is also from Mongolia. (AP)
November 13, 2006
Posted by Mongolian Culture at 9:15 PM