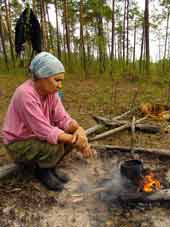 If true, according to Vajda, this would be the oldest known demonstrated language link.
But more research is needed to determine when the languages originated and how they became a part of various cultures before such a claim will be accepted, according to UC Berkeley linguist Nichols.
"I don't think there is any reason to assume the connection is [10,000 years] old … this must surely be one late episode in a much longer and more complicated history of settlement," she said.
Posted by Mongolian Culture at 3:27 PM