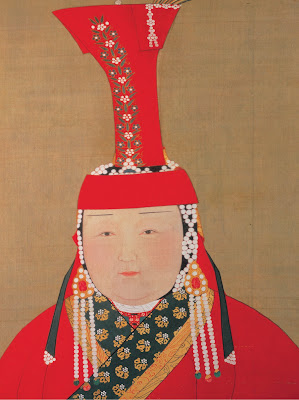 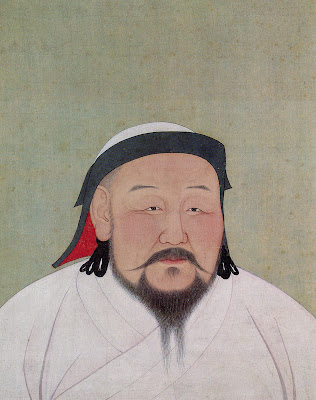 The long-awaited arrival of the Metropolitan Museum of Art’s The World of Khubilai Khan: Chinese Art in the Yuan Dynasty exhibition finally washed ashore on Manhattan Island in late-September, 2010 after many years of planning. The exhibition's manifest includes artworks dating from the pre-Song Dynasty period, as well as the reign of Khubilai Khan and the Mongol Yuan Dynasty in China.

On March 19th, 1279 at the decisive battle of Yamen, the Song boy-king Song Di Bing perished and the kingdom of the Southern Song fell at last to the Mongols. The Great Wall had once again failed to keep out the "barbarians" from the North and now all China was under the command of the Mongols. Having reunified China after more than 350 years, Khubilai Khan founded the Yuan Dynasty, (1271 -1368) and essentially created the nation-state of China as we know it today, including founding the capital at Dadu (modern-day Beijing).

The triumph of the Mongols over the Chinese Song Dynasty caused tremendous cultural upheaval and heralded a period of dynamic change in several arenas of the arts in Yuan Dynasty China.

The Mongol ruling elite were seasoned connoisseurs of fine art, intuitive arbiters of taste, and renowned patrons of the arts throughout their massive empire, from Siberia to Europe. Having completed their epic conquest, Khubilai Khan and the Mongols took time to savor the myriad delectations spread before them in a China that was now their richly appointed pleasure-garden.

After the fall of the Southern Song many demoralized Song court artists fled to self-imposed exile; yet many others sought out work at the Mongol court. On display in this exhibition is a rich bounty of extraordinary Yuan Dynasty art objects that are the fruits of the labors of Chinese artists, as well as those created by artists from Tibet, Nepal, Persia and Central Asia.

This subdued exhibition does not bring alive the Mongol presence in China as much as present a collection of extraordinary Yuan-period artworks along with a a mish-mash of others that are non-Yuan. The non-Yuan objects are from other dynasties, including the Xixia, Southern Song and Jin dynasties.

Although titled “The World of Khubilai Khan: Chinese Art in the Yuan Dynasty ” the Great Khan himself is generally missing-in-action in his namesake exhibition other than his striking regal portrait and close-by that of his royal consort, Chabi.

These two Yuan Dynasty paintings -- which are absolute masterpieces -- epitomize the clear distinctions of Mongol imperial aesthetic sensibility and character when compared to the portraits of Song Dynasty rulers. 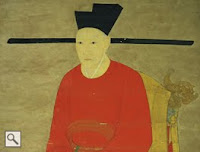 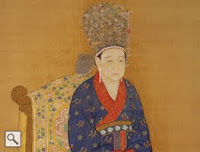 Whereas in Song Dynasty court portraits the Song kings and queens tepidly look away from the viewer with enfeebled expressions, dull eyes and pale pallor; Khubilai Khan and Chabi are positively aglow in their portraits, with fearless, twinkling greenish-brown eyes, rosy cheeks and direct, engaging gazes.

The relationship between subject and viewer is transformed by this Mongol approach of straightforward visual engagement, which is quite unlike the Song expression of tepid disengagement.

This pivotal change in imperial portrait aesthetic clearly demonstrates Khubilai Khan's sure-handed ability in giving art direction to Chinese court portrait artists and his preference for a dynamic rendering of his regal likeness. 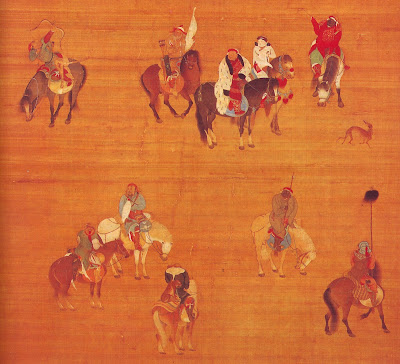 The hanging scroll showing Khubilai Khan hunting with Empress Chabi is not part of this exhibition, but is featured in the exhibition catalog. This particular painting conveys more about Khubilai's lifestyle than much of what is displayed in the "Daily Life" section of the exhibition.

Assuming that the "Daily Life" section is meant to illuminate Mongol imperial life, the viewer finds that the exhibition includes scarce mention of Yuan Dynasty court life, and is bereft of any details about the Mongol way of life during their reign in China.


The Mongol imperial hunt scroll painting would have deftly illustrated Khubilai Khan's personal lifestyle. The Mongol emperors in China retained their core cultural traditions of which hunting was an essential practice. Hunting remained a key part of the Mongol way of life during the Yuan Dynasty and was a fundamental training method for Mongol cavalry since the time of Chinggis Khan.

This excerpt from Marco Polo's observations about Khubilai Khan's hunting practices tells us where he spent more than three months of his daily life: " You may take it for a fact that during three months which the Great Khan spends in the city of Khan-balik, that is December, January, and February, he has ordered that within a distance of sixty days' journey from where he is staying everybody must devote himself to hunting and to hunting and hawking...... When the Khan has spent the three months of December, January and February in the city of which I have spoken, he sets off in March and travels southward to within two days' journey of the Ocean. He is accompanied by fully 10,000 falconers and takes with him fully 5,000 gerfalcons and peregrine falcons and sakers in great abundance, besides a quantity of goshawks for hawking along the riversides."

The degree to which Khubilai Khan affected a sinicized image has long been a subject for debate amongst historians and bears scrutiny in the design of this exhibition.

A critical fact that should be made known to exhibition visitors is that Khubilai Khan preferred to sleep every night in a Mongolian ger instead of inside the royal palace. This essential facet of his daily existence is important evidence of his determination not to allow his Mongol way of life to be displaced by sinicization in keeping with the Yasa of Chinggis Khan which was Mongol customary law for "all people who live in felt tents."

One aspect of Mongol culture that remained unquestionably unchanged during the Mongol-China period was the Mongol-equestrian lifestyle and the Mongol love of horses. Equestrian art naturally blossomed during the Yuan Dynasty and Chinese artists dutifully produced a veritable encyclopedia of horse and rider art.

Chinese artists worked hard to please the Mongol court and so there is a large body of Yuan art that includes horses in such magnificent depictions as Ren Renfa's scroll painting titled, "Nine Horses." 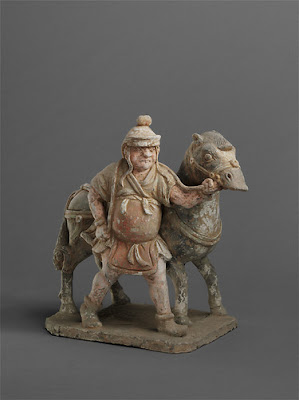 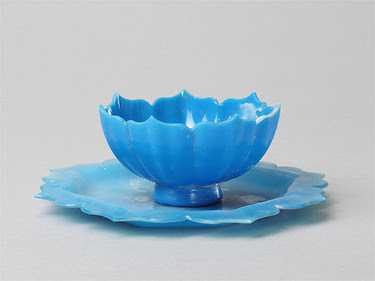 There is representation of many important Mongol cultural contributions including the Mongol court’s introduction of Nasij cloth of gold made of silk and gold threads which is recognized as a Mongol innovation introduced to China during the Yuan period. The accompanying exhibition catalog introduces as to the Mongol Princess Sennge Ragi, a preeminent Mongol patron of the arts and sister of the Yuan emperors Wuzong and Renzong. 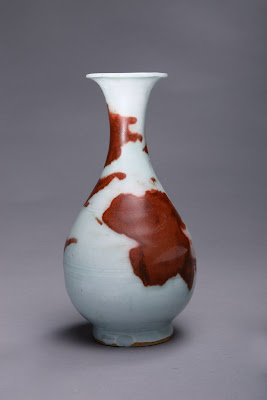 The steady flow of traders, imperial court officers, and artisans between the Ilkhanid courts in Persia, the Chaghatay court in Central Asia and the Yuan court in China promoted an unprecedented degree of artistic and cultural cross-pollination which gave rise to newly developed hybrid artworks in Mongol-China. Blue and white Persian ceramics with their novel underglaze method took hold during the Yuan and became iconic symbols of Mongol influence on the arts of China.

Mongol imperial patronage strongly encouraged the performing arts and is given its due credit which helped carry stage performances to unprecedented heights and spread to southern China. Scores of performing troupes and hundreds of prominent actors resided in Dadu during the Yuan period. 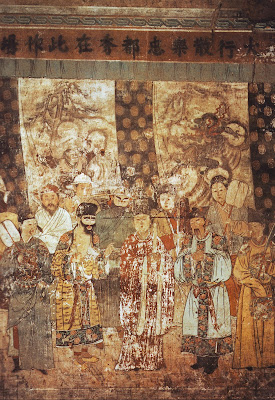 The Mongols introduced Indo-Himalayan style to China during the Yuan period. “Koden a grand son of Chinggis Khan…took the great scholar Kunga Gyaltsen, known as Sakya Pandita (1182 – 1251) to the Mongol capital at Liangzhou around 1245, ostensibly to encourage the popular understanding and acceptance of later Esoteric Buddhism, which was adopted as the state religion by Khubilai Khan in 1268. Sakya Pandita was accompanied to China by nephew Chogyal Phagspa (1235 – 1280).”(Excerpted from exhibition catalog.)

Phagspa Lama was commissioned to create a script that would be better for rendering the Mongolian language than Chinese script. This newly created script called Phagspa was much better suited to spoken Mongolian and Khubilai tried in vain to make it the official court script. Along with Phagspa was a young master artist from Nepal named Anige. He was named Director of All Artisan Classes in 1273 and trained many Chinese craftsmen in the Sakya style. 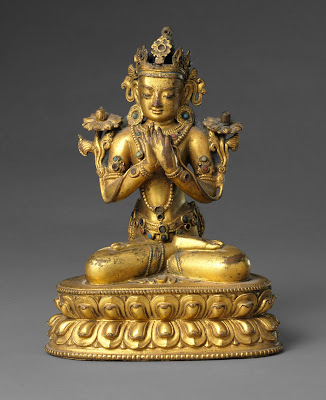 In matters of religion Khubilai Khan's rule championed religious tolerence and the Mongol court was a rich mix of peoples and religious beliefs. Khubilai oversaw vigorous debates between Buddhist and Daoist scholars and ultimately ruled in favor of the Buddhists. After Khubilai embraced Tibetan Buddhism, the Daoists were relegated to the backseat of the Mongol court for the duration of the Yuan Dynasty.

Not mentioned in the exhibition wall panel texts or catalog is the presence of shamanistic practices maintained at the Yuan court. The prevalence of Yuan Dynasty shamanistic court rituals is confirmed by the following passage from the book titled The Mongol Empire & its Legacy by Reuven Amitai-Preiss and David Morgan,“It is clear that throughout the Yuan period, shamans continued to play an important role at the court of the imperial Mongols. The Yuan dynastic history (Yüan shih) in fact includes a section entitled “Dynastic customs and old rituals” (kuo-su chiu-li), much of which is devoted to descriptions of shamans presiding over seasonal ceremonies.” 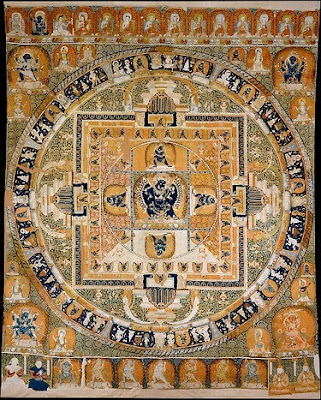 "Central Asian tapestry-weaving techniques and Indo-Himalayan imagery are here combined to stunning effect in this spectacular mandala, which was most likely used during an initiation ceremony at court. The donors at the bottom left are identified by Tibetan inscriptions as two of Khubilai Khan's great-grandsons: Tugh Temür, who reigned twice as emperor between 1328 and 1332, and his brother Khoshila, who reigned briefly in 1329. Their respective spouses are shown at the far right. This combination of individuals helps date the work to the period between 1330 and 1332." (Excerpted from MET website.) 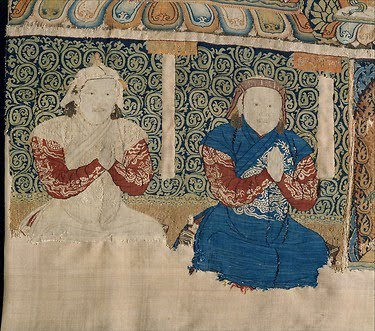 The World of Khubilai Khan: Chinese Art in the Yuan Dynasty is a good introduction to the rich cultural history of Mongol-China and hopefully it will inspire the viewer to look deeper into historical accounts to learn more about Khubilai Khan and the extraordinary history of the Mongols during their reign in China.

The Mongol Empire & its Legacy by Reuven Amitai-Preiss and David Morgan, pg. 225
Posted by Mongolian Culture at 4:52 PM