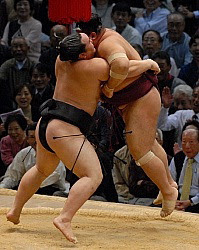 Asashoryu, who wrapped up his 19th Emperor's Cup with a win on Saturday, got both hands on the belt of Chiyotaikai and lifted the ozeki up and over the straw ridge in the day's final bout at Fukuoka Kokusai Center.

"It's always nice to win every bout," said Asashoryu, who won the Kyushu meet for a third straight year. "From the 10th day I started to feel I had a good chance to win the title and fought with the pride of a yokozuna."

Mongolian Asashoryu, the only grand champion competing in sumo, defeated Kotooshu on Saturday to secure the title in the year's final tournament.

Sunday's win capped an impressive run in the 15-day Kyushu tourney and was the fifth time Asashoryu has won a meet with an undefeated record.
Posted by Mongolian Culture at 11:16 PM