The impact of Mongol culture and history on modern popular culture can be seen in several instances in contemporary art, Hollywood films, literature, news media, video games and other arenas of popular culture.From the borrowing of traditional Mongolian costumes, facial makeup and hairstyles by George Lucas and costume designer Trisha Biggar for the Star Wars films to book jacket covers by designer Tibor Kalman, Mongolian culture and history occupies a distinct place in modern cultural history. 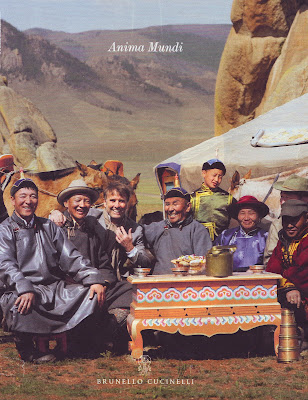 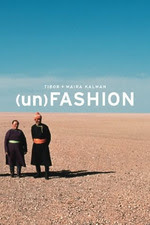 by Tibor Kalman and Maira Kalman.


This book titled, " (un) FASHION " by Tibor Kalman and Maira Kalman is a global photographic survey of native fashion-sense and presents indigenous peoples from almost every corner of the planet dressed in traditional costumes in their cultural context.

Tibor Kalman was considered a design genius in his time, whose fascination with the creative ways people around the world choose to adorn themselves is vividly on display in this book, and on the book cover, which shows a Mongol couple dressed in traditional Mongol del looking quite stylish in the Gobi desert. 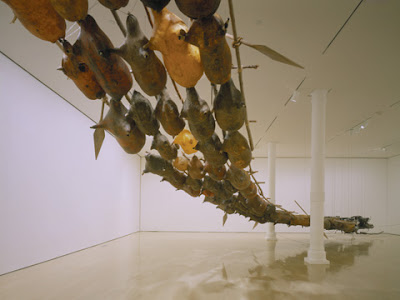 Shown in 1996 at the Guggenheim Museum in New York City.

( This artwork was comprised of ) “a gigantic boat made of logs and inflated sheepskins ineffectually powered by a brace of Toyota engines. Cross-wiring temporal references to conjure all manner of Asian invasions - from the Mongols, who used similar sheepskin devices to ford rivers, to Japanese cars - this dragon's immobility belied its roar, though its grandiose scale amounted to a sort of theatrical efficacy. Unfortunately, the circus-like ambiance of the exhibition as a whole emphasized that grandiosity rather than the work's humor or bizarre material presence.”

Quote from Barry Schwabsky on Highbeam Encyclopedia, 1997.
Posted by Mongolian Culture at 11:37 AM